It's a long time in posting, apparently I have used up my photos memory/storage and I now have to pay to blog.
Those pics must be not bad because the stats say that there are over 12,000 views to the hilltop, I feel quite special about it.


Things have been a bit chaotic here and it's a shame because there is still no working oven but we are grouted.


This week was T's birthday.
WooHOO!

I have been saving these pictures for a while though I am sure I am missing lots or maybe I started photographing them a long time in to her habit.

T ties things in knots. In fact anything wrapped round anything is taken away and re used and any toy will probably at some time or another be secured to a house hold object.

She just can't stop herself. 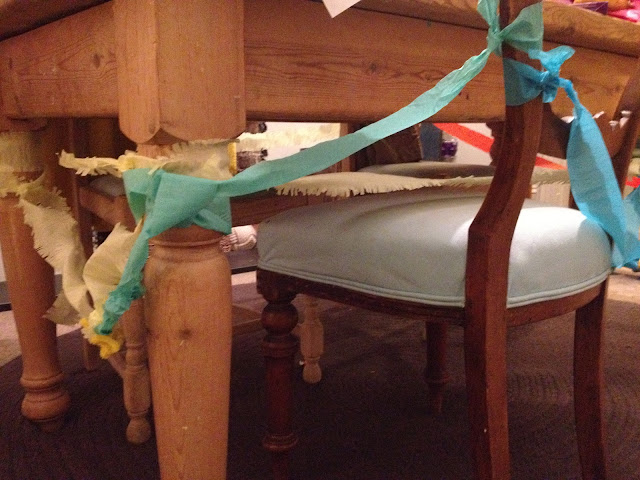 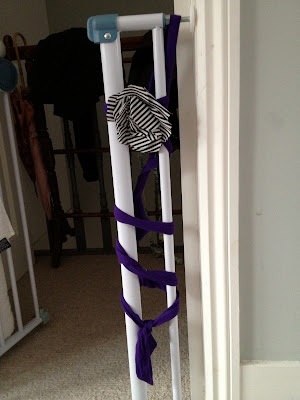 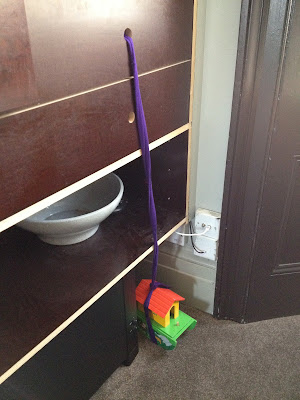 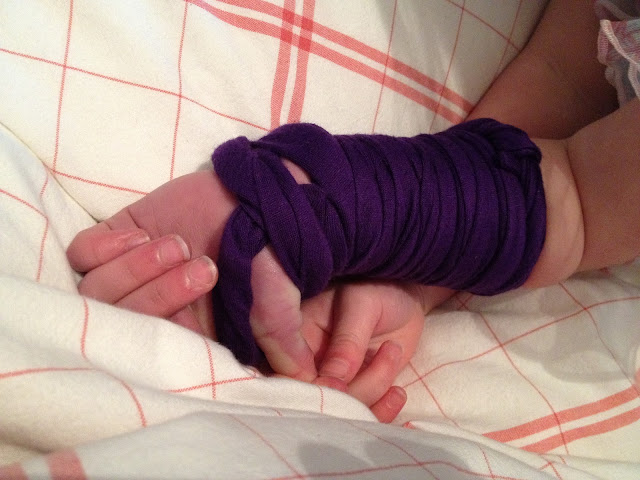 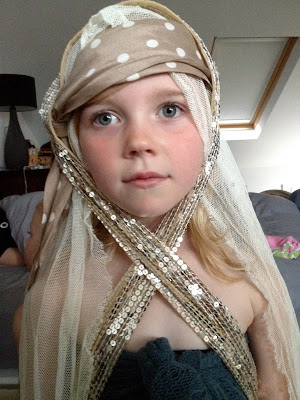 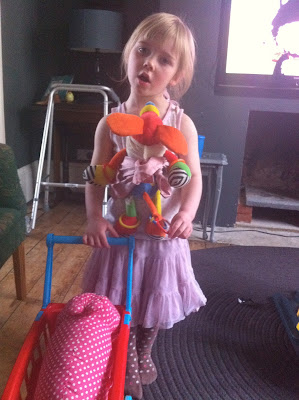 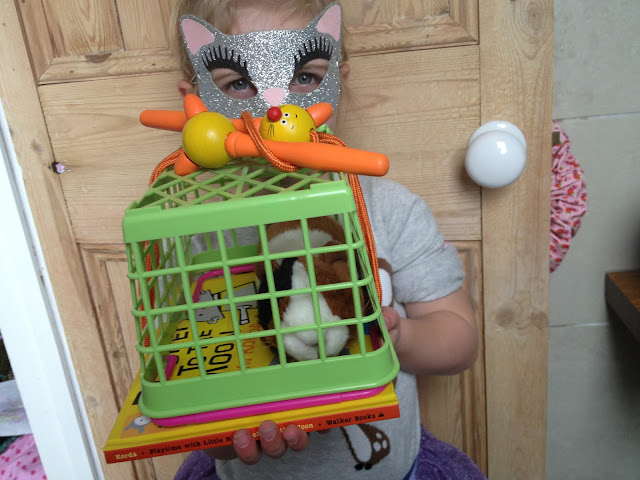 This is T as a Sciencer, job, to turn animals into other animals. Deadly serious.


Recently I found this saga in her room 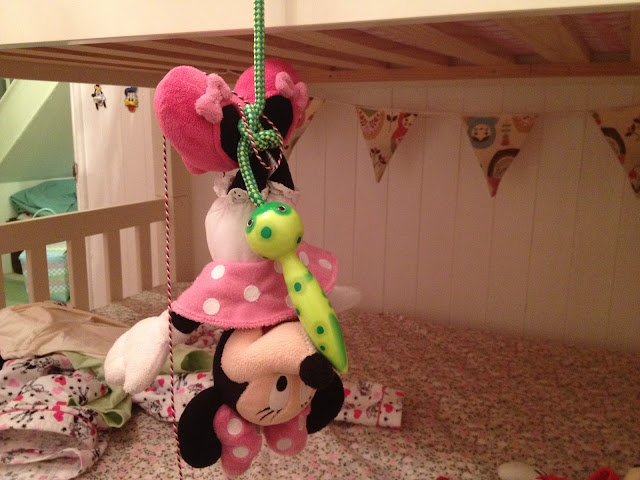 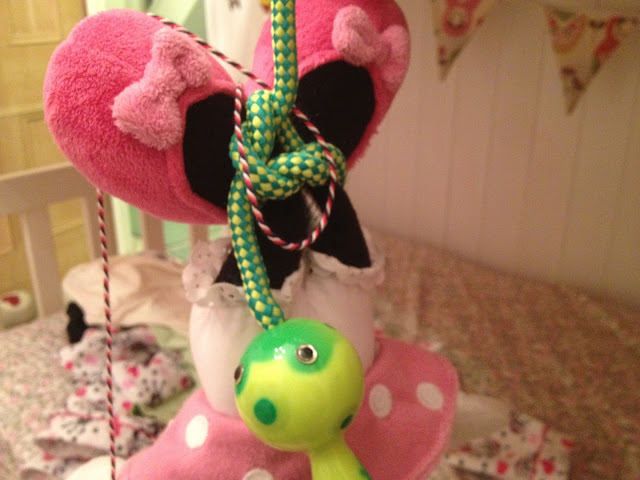 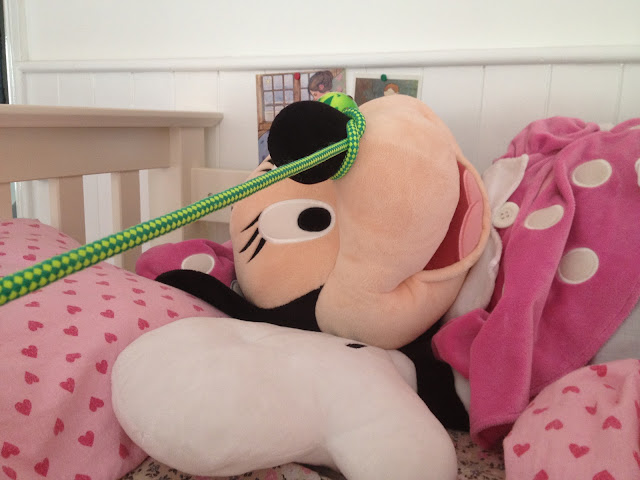 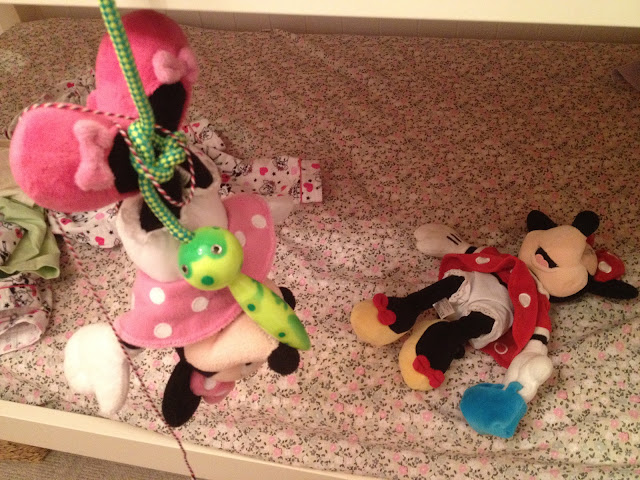 At this sight I wonder if Red Minnie is flat out on her back in hysterics at the mess Pink Minnie has managed to get herself into.
(actually its the Disney version of me and FMH) 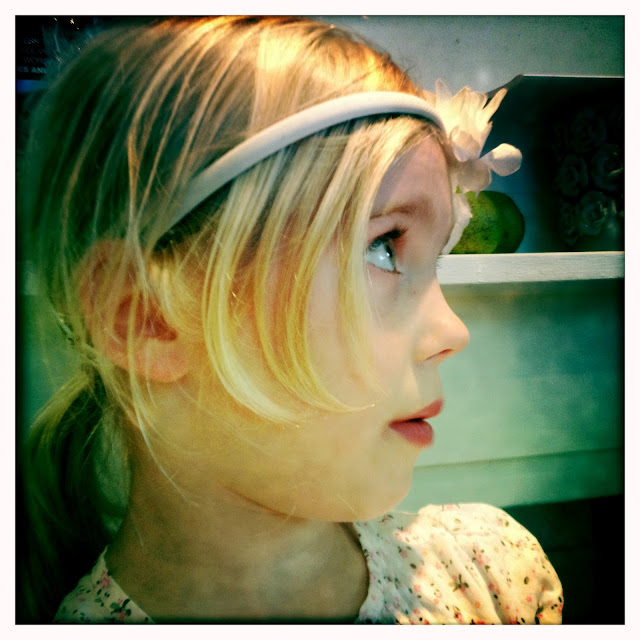 What a year you've had, first year at school, genuine health scare in the spring, studying furiously and trying really hard to win at everything and everyone seems to want to be your friend (which I find rather annoying because you are not a rental), a fantastic active Olympic summer, a small issue with you wanting to be 13, you plat your own hair and now back to school to year 1.
Tomorrow you are going to learn to ride your bike.
Daddy thinks you'll be fine without stabilizers.
Lets watch this space and I'll get the first aid kit ready.

You are not my chunky preschooler anymore, you are growing fast, your head a little quicker than the rest of you. I think sometimes you might be a driod because some times my emotions really go way over that big head.
You still like everything plain and simple and bedtime is still your choice at 7 although your dancing is becoming far out.
You are my big girl and show me so much love every day. I am jealous of school they get to hang out with you more than I do and I so wish to spend more time in your company. 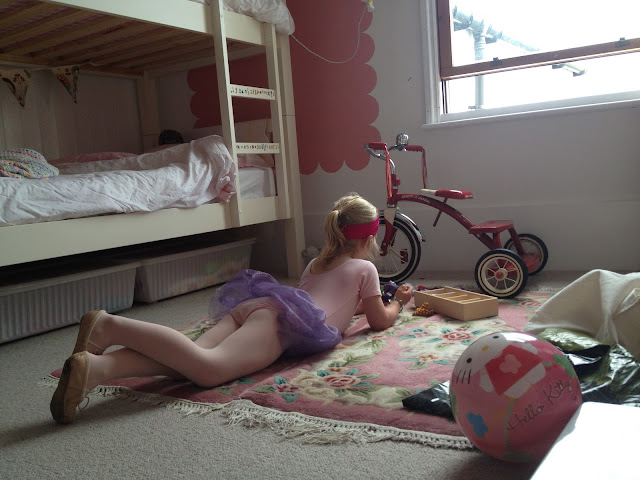 Maybe I can ship evil P to boarding school and we can go out for milkshakes and cake.
At this point you are generally happy to play and be with P who thinks the world of you as do we.
Happy birthday my smiling T.
I love you round the universe and back.

Posted by Aubrey Wishbone at 16:07 No comments:

Been a while, so much going on, the kitchen, kids not well, G not well and just trying to focus on stuff.

Found this great little you tube today, I am saving it for when T is a little older and starts worrying about the size of her bum.

If you have a daughter or worry about your dark circles, dull complexion or how shinny your hair isn't then this one is for you.


I bought a magazine to read in the bath last month, it looked Christmassey. I am sure it was my first fash mag this year.
I thought it might perk me up
It had 'Flat Deeley' on the cover.
What a waste of money!


Things are brightening up at the Homestead and it's T's birthday next week, thankfully a friend has loaned me her oven to bake T a cake for her party this weekend. The pass the parcel is wrapped and the party bags are ready. 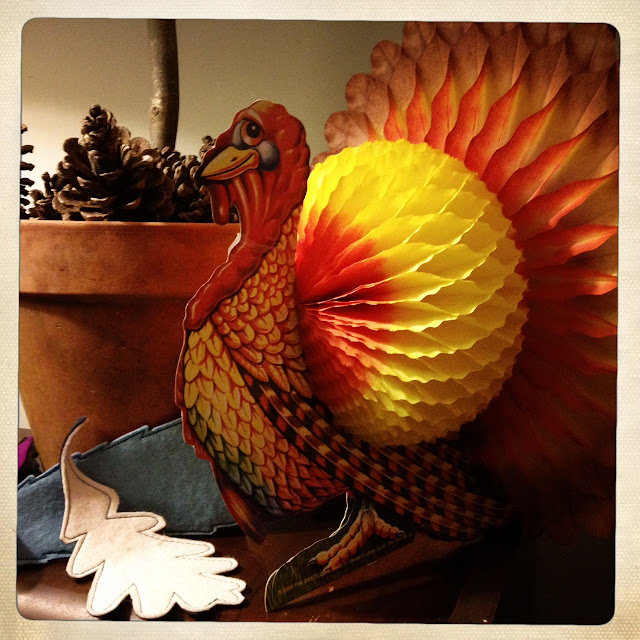 Happy Thanksgiving
CM
Posted by Aubrey Wishbone at 14:02 No comments:

Did I mention in a post before that a dream job would be to sweep out cluttered front gardens and make everything look presentable?

Found these whilst secretly looking at the Daily Mail online, the shame.
Have cut the addiction again last night, remember I don't actually read it, it's all about the photos.

But in another life I would kill to take on this Japanese Resort abandoned in the 1970's. 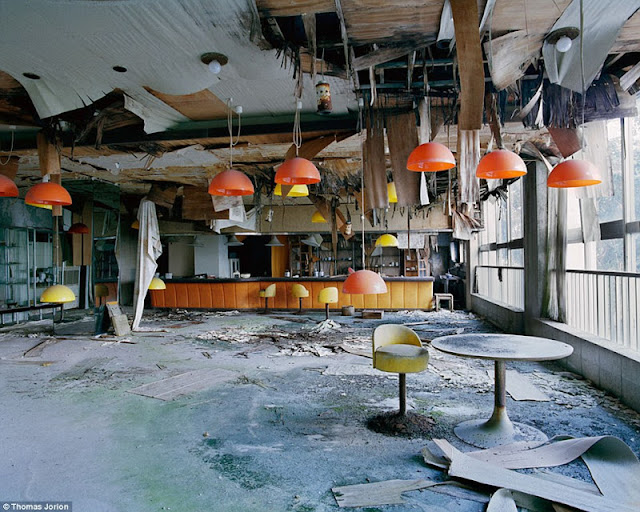 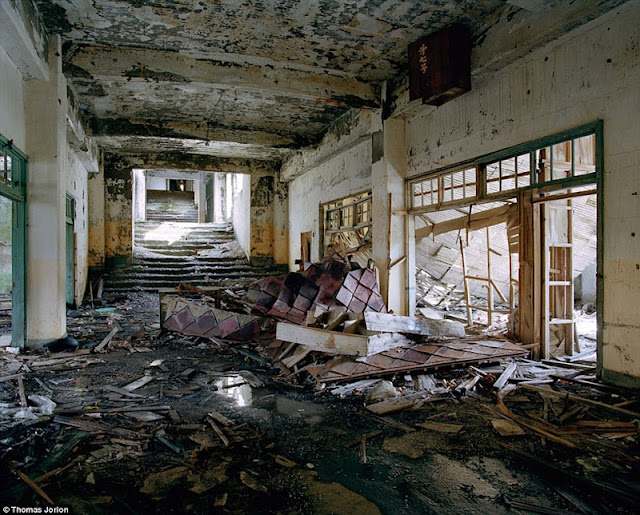 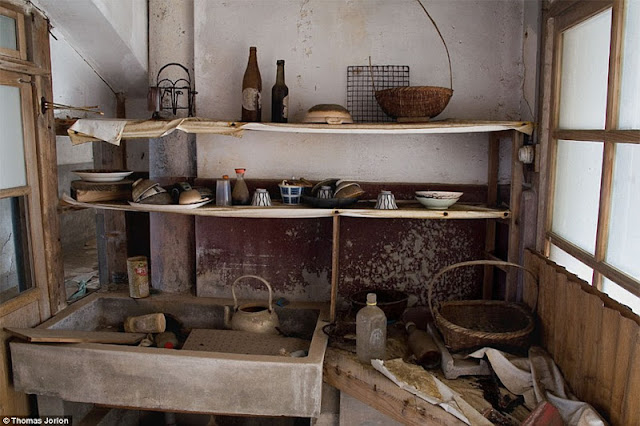 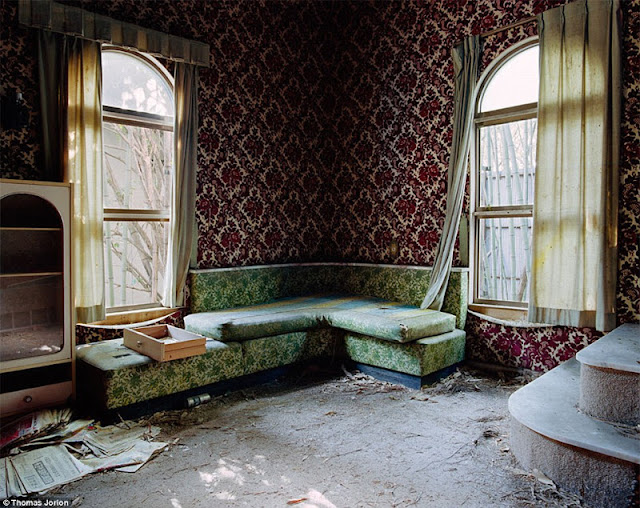 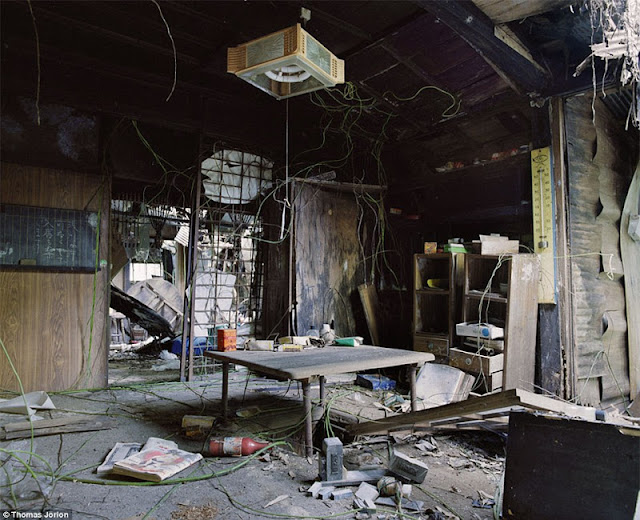 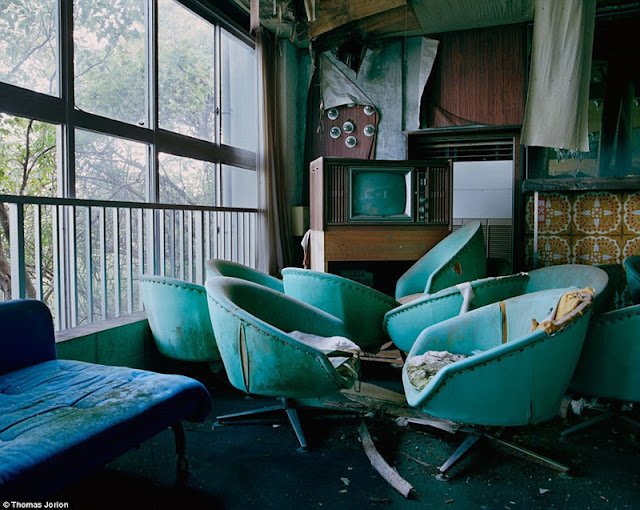 The photos are taken by Thomas Jorion and you can read the article and see more amazing pics here. 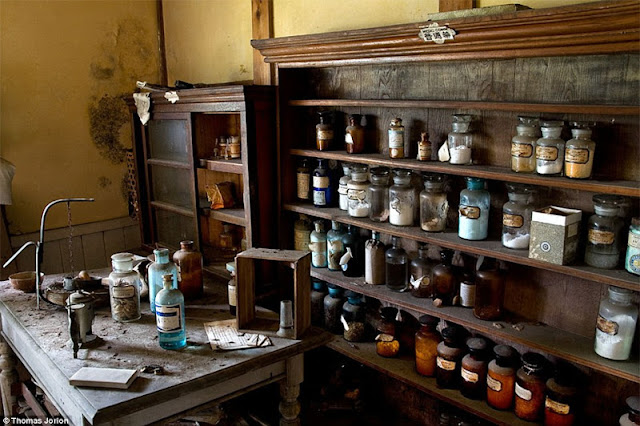 Message to FMH - Lets go!
I will bring the broom, rubble bags and damp cleaning cloths and then we can shop for textiles.

We are a bit nuts for American politics in this house and have been following anything we see on TV
I think all that West Wing we repeatedly watch rubbed off on us. 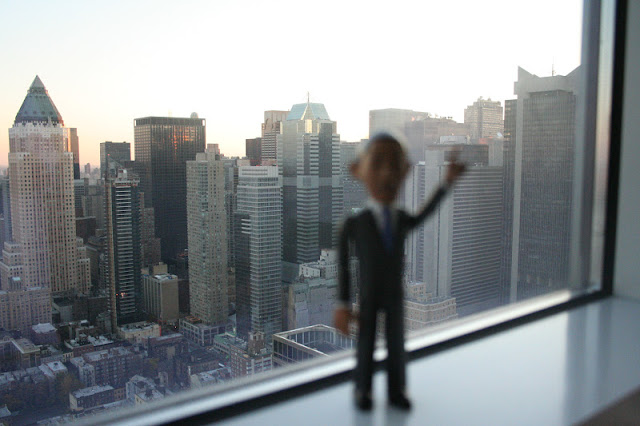 This picture was the morning after the results of the previous election.
This morning I was in Topps Tiles.

CM
Posted by Aubrey Wishbone at 13:22 No comments:

We went to NYC four years ago.
I remember because T kept UK time all week and then got sick, finally I got some sleep but slept through Barack Obama wining the Presidential Election.
Earlier in the same week I made my way to New Jersey to see a good friend who has married an American and settled very happily and is making herself a family.

I love New Jersey and want to go back there more than anywhere on the planet actually.

I walked down 9th Avenue to Penn Station to get the train out, on the way I found a gem called Manganaro Grosseria Italiano.
Worried that I might miss my train I only stayed long enough to scan the place but ended up going back in on the Sunday with a hungry NJ in tow to get her a sandwich.
The reception was frosty, tomato and mozzarella was going to be difficult because the proprietor had only just switched the grill on.

You apparently can't get everything you want in NYC neither can you park except in the
Croatian Church car park in Hells Kitchen although you might have to wait for the congregation to go home for your space to become unblocked.

Whilst looking for kitchen inspiration I searched Manganaro's, over the years better photos have appeared on line, for a long time there was nothing. 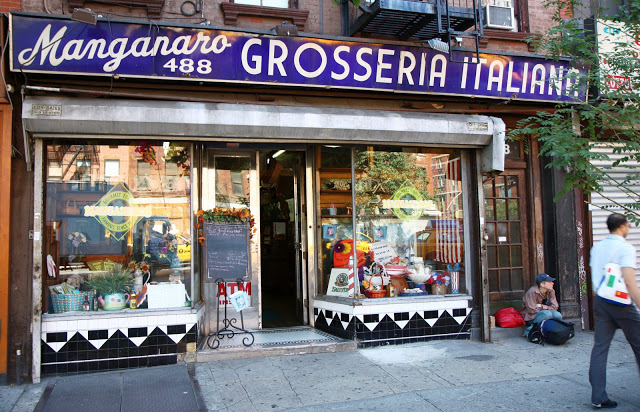 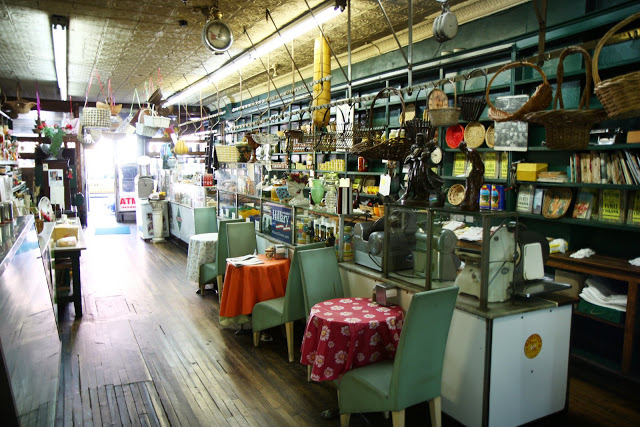 This is the front of the store and then at the back you can eat. 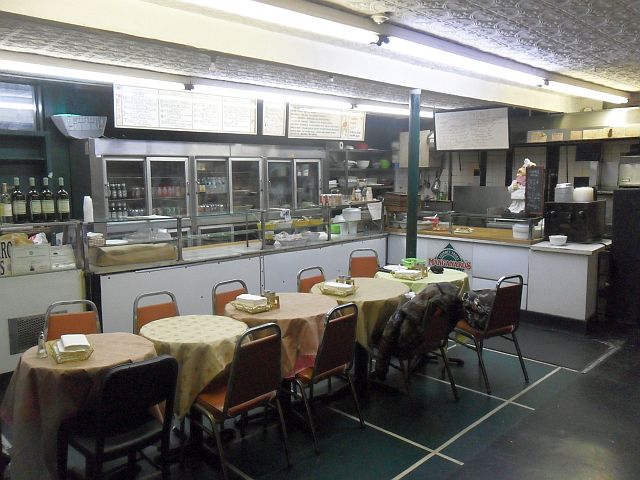 
Can you see on the back wall there are white tiles with black tile shapes. do they say FISH, no? you can see more if you go to a You Tube interview, and I watched both English and Italian which wasn't necessary.

G is so not going to go for that look at all.


Jeremiah Moss knows what is really going on with the traders of old New York and I gasped to find out that after 119 years Manganaros has served it's last pate of spaghetti and red sauce.
Selfishly my heart skiiped when I read that what contents weren't sold were chucked out into the skip
AAAARrrrrrgggHHH!

Not the big Toledo Scales?!

He then goes on to talk about The Elk Hotel. Follow the link it really is a page turner.
We stayed next door to the Elk in the big bad Orion Building with its 50 floors of shiny windows and Olympic concierge service (that would be another Obama related tale). 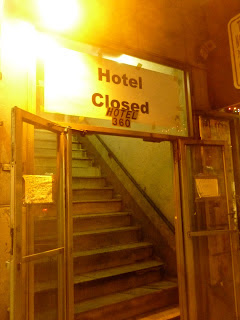 The Elk Hotel was like something out of a movie set and any information that I might have tried to gain was cagey.
All questions now very well answered thank you very much Mr Moss.

Anyway this post was supposed to be about tiles but I think went off a bit.

I finally spoke to New Jersey today via Skype. With no power and a freezing cold burst following in behind Sandy she has gone to stay with relatives.
I knew she would be alright although she was worried about the tall trees in her garden, I suggested she put a helmet on the baby, jokingly but as the news reports went by I began to think that wasn't such a bad idea.
Maybe she could write a guest post here about all that happened?


Very tired and looking forward to the weekend
CM

Posted by Aubrey Wishbone at 18:36 No comments: