Yesterday we had a play date with the most perfect family, another one! I know!
But it was cut short as T took her second tumble of the week and landed on the same knee and although its not broken it is busted.
Bloody Scooters

This is her this morning cleaning the wound.
That is a Liberty Print Lacoste Dress that was a gift from her uncles and P has one too. Super Cute. 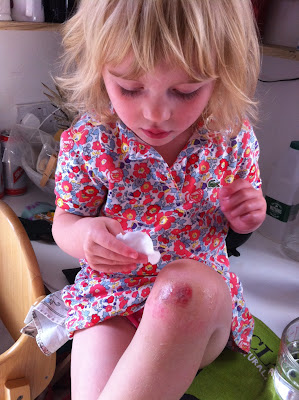 It took a life time to get the plaster off and she was being a real woos about the whole thing but she cleaned it up herself and really impressed herself at her capabilities in the end.

So yesterday when it came to cleaning the knee she wouldn't let anyone near it and tried everything in her spell book to distract us. Anyway I lost it BIG TIME and administered first aid using the sink the kitchen table and finally the sofa where she yelled I hate you.
As the afternoon dragged on and I could see all the cracks in my parenting it pretty much worked out to be one of those days where everything is rubbish.
Thankfully G made dinner or that could have been the icing on the cake.

This last week or so I have walked round with a cloth bag from a shop that I am to fat to shop in, there was no first aid kit packed when I really needed it. I always thought I would be prepared with the most excellent stuff to make any situation better.

In fact the last time I saw the plasters was when they were all attached to the legs of the dinning room table after T asked me if she could have one for her bear and in fact couldn't control herself and opened them all. I suppose at the time I wasn't that bothered because I had bought them when she was born and we never really needed them.
That time has now changed and I feel like crap.
Because I feel disorganised.
I think about times I have felt rubbish as a teenager through till now and its because I have been unable to organise my self and then I have tripped up.

So I am having a bit of a mope which of course I know will do nothing so in about half an hour I will pull myself together. Grab the reins, saddle the horse get my gun what ever. Probably buy a really lovely expensive saddle bag to carry stuff and get on with it.

I took these of the poopster last week. she is learning body parts.

She is pushing four painful teeth at the moment and enjoying making noise about it.

I think that is enough talk of children for a while.

Yesterday marked one year until the London Olympics and I thought of writing a list and seeing how much I could achieve to change in my habits/daily living by the time I reach the opening ceremony. Eddie Izzard was on the radio this morning saying we could all achieve more this coming year.
He probably meant something a whole lot more than the route I will be taking but it's a thought anyway!

Off to get pen and paper
CM
Posted by Aubrey Wishbone at 04:50

Email ThisBlogThis!Share to TwitterShare to FacebookShare to Pinterest
Labels: Hanging Out, Learning